By Hazel Wardrop, Research Manager at the Equality and Human Rights Commission. 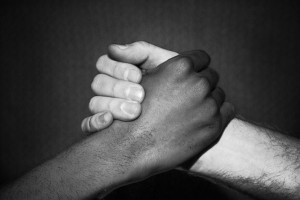 During and after the UK’s referendum vote to leave the European Union, recorded hate crime increased significantly, police in England and Wales say. More must be done to understand, measure, and tackle discrimination and hate crime. The Equality and Human Rights Commission has just published two new research reports which bring together the latest evidence and insights on hate crime, and how prejudice leads to discrimination, unlawful harassment and violence. The report on ‘Prejudice and Unlawful Behaviour’ was led by Dominic Abrams, Hannah Swift and Lynsey Mahmood at the University of Kent. The report on ‘Causes and Motivations of Hate Crime’ was led by Mark Walters and Rupert Brown at the University of Sussex.

To get to grips with tackling hate crime, we need to better understand the factors and drivers that could lead a person to commit a hate incident or crime. The reasons why people perpetrate hate crimes are complex, and situational factors – like location, opportunity, and the relationship between the perpetrator and the victim – often differ depending on the type of offence and the type of hate-motivation.

There is no standard type of hate crime. Incidents can take place in different locations, such as at home, in the community, in public spaces and on public transport, and they can take the form of one-off incidents or ongoing victimisation. Hate incidents can also take different forms depending on what group is targeted – theft and fraud is more prevalent among recorded disability-motivated crimes and public order offences against the person are more prevalent for recorded racially and religiously-motivated crimes.

Contributing to this complexity is the growing phenomenon of online or ‘cyber’ hate – the spreading, incitement, promotion or justification of racial hatred, xenophobia, anti-Semitism or other forms of hatred based on intolerance on the internet. While less well understood, people carrying out online hate speech and/or crimes may have similar motivations to those carrying it out ‘offline’ but it is often not clear how online hate crimes relate to those that occur offline. For example, because of the role of the internet in spreading messages and ideologies, it is important to know if and when materials viewed online, or hate acts perpetrated online, incite, lead or encourage people to take part in hate incidents offline, and vice versa.

We need to gain a better picture of the prevalence of hate crime for different groups to understand where things are getting better or worse, or where they are staying the same despite change being expected.

It is difficult to get a robust picture of the prevalence of discrimination and hate crime experienced by people that share different protected characteristics because of the range of different measures that are used to capture discrimination and hate crime across England and Wales, and Scotland, including different approaches used by one-off studies, regular national surveys, and data routinely collected by the police. One example is the different questions and methods used to capture prejudice towards disabled people in England and Wales compared to Scotland. When these reveal different patterns, it is difficult to know if this because levels of prejudice are different in the two countries, or because the information is being collected in different ways, or a combination of the two.

The ongoing problem of both under-reporting of hate crime and under-recording by the police also makes prevalence difficult to assess. There are new ways to capture the prevalence of hate crime in the form of third party reporting agencies and apps, to encourage those who may not feel able or willing to go directly to the police to report hate crime. The online reporting mechanism True Vision experienced an increase in reports of hate crime following the EU referendum.

Although there are many programmes aiming to reduce discrimination or hate crime, there is little robust evidence on ‘what works’. One problem is the lack of good quality evaluation of different programmes which makes it difficult to assess which approaches work well, in which situations, for which people, and why.

However, there are a few promising approaches, including tackling bullying in schools, addressing stigma around mental health, educating on diversity and difference, and encouraging contact between different groups in society. Public authorities, under their Equality Act Public Sector Equality Duty, have a legal obligation to consider the need to eliminate harassment and victimisation and foster good relations between people. This is an important tool in countering hate crime and must be applied effectively.

Because of the complexities in understanding, measuring and tackling discrimination and hate crime, it is important to devote time to developing and testing effective approaches, not only to reduce and prevent it, but also to measure and record it robustly. That way we can ensure practitioners have access to effective tools.

The Commission wants to learn more about what approaches work in tackling discrimination and hate crime and to identify effective levers for change. We are looking for organisations across Britain that are trying out effective interventions and are interested in evaluating these so they can be transferred and scaled up. If you want to find out more, please contact hazel.wardrop@equalityhumanrights.com.

3 comments on “Discrimination and hate crime in Britain: Understanding, measuring, and tackling it”