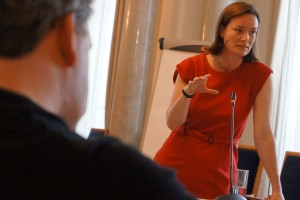 When you ask us whether the picture of hate crime apparently being painted by the media and even the police is one that ‘you’ recognize, I am curious: who you are asking? Is it Muslim women who have their hijabs ripped off while being spat at? Or perhaps you are addressing disabled people who are forced to organize their day so that they can avoid public transport when schools are out? Maybe you are talking to the manager and frequenters of the Polish Cultural Centre in West London that was attacked right after the referendum? The point about taking a victim-based perception approach to recording hate crime, is that it brings the victim’s (not your) perspective into the public consciousness and to the attention of the police who can protect, investigate, reassure and prevent.

“Hate crime” has been written and broadcast about for a long time and the media will always put their own spin. While you appear to conflate ‘officials’ and the ‘press’, I would like to focus on the point, that as far as the police, CPS and government are concerned, they are taking the right approach when it comes to hate crime recording policy in this country. I will leave it to others to explain the media, but I am curious as to why you appear to conflate the two in your piece.

The official hate crime recording policy of the police and CPS on hate crime is evidenced, principled and internationally respected. Following the Referendum, the police have drawn on their figures to point out that there has been a significant increase in reported hate crimes. This could be for a number of reasons. It might reflect an actual increase in hate crime, it might reflect an increased resolve on the part of victims to report what has happened to them for the first time. It might be that leaders and those in solidarity with victims have supported people to take the brave step to report what has happened. It probably reflects a mixture of all of these things. Unfortunately, I doubt that articles such as yours will help efforts to give people this courage.

If you need any evidence for why taking this approach to recording hate crimes is so important, then take a look at Crime Survey for England and Wales figures. You will see that the percentage of hate crimes that are not reported to the police is still very high. You will also see from data released by the Community Security Trust, which monitors antisemitic incidents and Tell Mama which monitors incidents against Muslims both registered spikes, mirroring police figures after the Referendum.

The commendable point about the UK approach to addressing hate crime isn’t that leaders in the police, Crown Prosecution Service and Home Office brag about how tolerant the country is, it is that they publically accept that while significant progress has been made, there is still a long way to go before everyone in our society feels safe and protected to go about their daily lives.

You criticize the way that statistics are gathered, saying that they present a warped view of reality. But this is only the case if the method isn’t explained, when in fact it is, clearly, in many formats, targeting many audiences, including the press. Contrary to what you appear to suggest, the definition of hate crime hasn’t been ‘redefined’, in fact, data have been gathered using the same method (victim- based perception) for several years and are thus comparable. The recording method is crystal clear and significant efforts are made to ensure that it is understood by frontline police.

You seem to be implying that every victim of an incident (and these are actual incidents- someone was actually verbally abused, threatened, or assaulted, their property was actually damaged) will want to ‘get away’ with calling it a hate crime. Although you triumphantly ‘de-bunk’ the myths of two recent incidents, research actually shows that most victims don’t report hate crimes for reasons ranging from the frequency of the attacks, because they weren’t aware that what happened was a hate crime, or they are worried about some kind of retribution or, most relevantly in your case, because they fear that they won’t be believed. This partly explains why in fact a significant number of hate crimes are registered by ‘another person’ (the other part of the definition that you didn’t mention in your piece) as a hate crime. And guess what, that person is often…a police officer.

“And it gets worse: the prosecution of a hate crime doesn’t actually have to prove that hatred was the motivation. The CPS states: ‘The prosecution does not… need to prove hatred as the motivating factor behind an offence.’ The CPS says any crime that involves ‘ill-will, ill-feeling, spite, contempt, prejudice, unfriendliness, antagonism, resentment, or dislike’ on the basis of a ‘personal characteristic’ could be a hate crime.”

You may be aware that it is ‘hostility’ not hatred that needs to be proven by the CPS for all hate crime laws (except incitement to hatred) to apply. As CPS policy and legal guidance clearly states, in the absence of a legal definition of hostility, lawyers should use the definitions of hostility that you refer to as a guide. Why would CPS guidance set a higher threshold of proof than is actually required by our hate crime laws?

The police are absolutely not discouraged from seeking further evidence that an incident is a hate crime. Unless you also think that the court simply needs the victim’s perception to apply our hate crime laws, clearly the police will need to work with the victim to investigate evidence of hostility based on identities covered in our hate crime law and the CPS will need to determine whether there is sufficient evidence to proceed, based on the Code for Crown Prosecutors, as with all other cases. Again, this is all explained on the CPS website.

You may not be aware that one of the key reasons why the police and CPS record cases that are perceived by the victim or any other person as a hate crime is so that the victim can get support as early as possible and as set out in our Victims Code of Practice. I am curious as to whether this is also a problem for you. Are the victims again getting away with something by getting support? Are they smearing the UK’s reputation as a tolerant country by being referred to someone to talk to about their experience, or by getting special measures so that they are confident enough to give their evidence in court?

You ask the reader (somewhat patronizingly in my view) to, ‘Think about this. If any gay man is shouted at in the street, by anyone, about anything, with no mention of sexuality, that can be recorded as an anti-gay hate crime. There’s no need for any proof whatsoever that anything anti-gay in sentiment was said or even intimated.’

Actually Lord Macpherson thought about it when he reviewed the catastrophic service provided to the Lawrence family by the Metropolitan Police Service. After serious thought, he decided that in order to give a voice to the victim to share what they think happened to them, in order for the police to refer them to support services and in order for policy makers to have an idea of the nature and prevalence of targeted hostility in Britain, recommending this recording method was the right approach. Also after serious thought and consultation, the police and CPS decided to adopt this victim-centred approach as a matter of policy to help ensure consistency of service to victims. If you need to be vainglorious about something, this process and resulting policy framework might be a better choice.

You patronise those involved in hate crime policing, policy and practice by saying that taking a victim-centred approach to hate crime recording (or, in your words, “creating a panic”) gives “our officials a sense of purpose and history”. On what are you basing this bizarre conclusion? Please explain, I simply can’t figure it out.

And it is “vainglorious” to say that “Britain is the most tolerant country in Europe, perhaps the world” because you haven’t offered a shred of evidence to support this claim. In any case, so what if Britain is more tolerant than France? Is that good enough reason to change our hate crime recording policy? Of course it’s great that things have progressed from the 1980’s. Do we stop here, feeling smug and ‘patriotic’? What matters is that there are people who are feeling unsafe simply because of who they are or who they are perceived to ‘be’. Why not build on whatever success we have achieved and focus on finding out what is actually happening and what actually works to protect people, to support them and to stop targeted violence instead of finding ways to minimize, dismiss and belittle people’s experiences? Anyone can be a victim of hate crime, let’s all try to create an environment where if it happens to any of us, we have the confidence to come forward and get help.

To learn more about hate crime, its impact and what works to stop it, I urge you and Spectator readers to take a look at the fantastic online library and other resources at the International Network for Hate Studies.

I worry that articles such as yours do not further our understanding.

Co-chair, Advisory Group to the International Network for Hate Studies

2 comments on “Response by Joanna Perry to “Britain’s Real Hate Crime Scandal”, by Brendan O’Neill, published in The Spectator on 6 August, 2016”