Is Britain Fairer? Hate crime as a human rights issue

Is Britain Fairer? Hate crime as a human rights issue 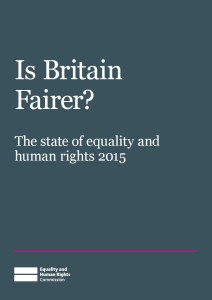 The issue of hate crime in London and across Great Britain has dominated headlines. In October 2015, the Prime Minister David Cameron announced a commitment for police forces in England and Wales to record Islamophobic offences as a separate category of hate crime, in a similar manner to anti-Semitic hate crimes. New data on hate crime released by the Home Office on 13 October 2015 showed an 18 per cent rise in the number of hate crimes recorded by the police in England and Wales between 2013/14 and 2014/15. This increase was seen across all five of the monitored strands of hate crime (race, religion, sexual orientation, disability and transgender identity).

Trends in hate crime recording since 2008 are just some of the data discussed as part of a new report published by the Equality and Human Rights Commission on 30 October 2015.

‘Is Britain Fairer?’ is the Equality and Human Rights Commission’s statutory five-yearly report on equality and human rights progress in England, Scotland and Wales. The report follows on from the Commission’s first report on equality, ‘How Fair is Britain?’ (2010), and its initial human rights report, the ‘Human Rights Review’ (2012). To answer the question ‘is Britain Fairer?’, the Commission undertook a large-scale systematic review of evidence using the its measurement frameworks to assess human rights and equality progress since the earlier reports.

Hate crime as a human rights issue in Great Britain

For our review, we chose hate crime as an indicator to assess how certain human rights are protected in Great Britain, principally freedom from torture and inhumane and degrading treatment or punishment (Article 3 of the European Convention on Human Rights (ECHR)), the right to liberty and security of person (Article 5, ECHR), and freedom from discrimination in the enjoyment of these rights (Article 14, ECHR).

Two different types of information on hate crime can be taken into account when looking at hate crime trends. The first is information from national crime survey data which reflects self-reported experiences of crime. The second is government-collected data on the number of crimes recorded by the police. These two sources can show a very different and complex picture of hate crime.

Analyses of figures drawn from the Crime Survey for England and Wales show a small but significant fall in the proportion of adults reporting that they had experienced a hate-motivated personal crime between 2008/09 and 2012/13.

Analyses of police-recorded crime statistics in England and Wales also indicate an overall decrease in the total number of hate crimes recorded by the police in England and Wales between 2009 and 2013/14. However, if we look more closely, there are important differences between individual categories of hate crime. While the number of race-motivated hate crimes did fall (the most commonly recorded motivation for hate crime recorded by the police), there were in fact increases in the numbers of hate crimes recorded as being motivated by religion, disability and transgender identity.

In Scotland there was an overall increase in the number of hate crimes, specifically those motivated by disability and sexual orientation, reported to the Crown Office and Procurators Fiscal Service by the police and other reporting bodies. As in England and Wales, race was the most commonly identified motivation for hate crime in Scotland.

The interpretation of hate crime data is complex. Increases in police recording could reflect changes in reporting behaviour, a strengthened legislative framework or operational response within the police and criminal justice system, as well as changes in incidence rates. Furthermore, in 2014, statistics based on police-recorded crime data in England and Wales were found not to meet the required standard for designation as National Statistics and the underlying data on crimes recorded by the police found not to be necessarily reliable.

For this reason, it is useful to compare official crime rates with national crime survey data, and also to look at experiences of victims of hate crimes collected in other ways.

A rise in Islamophobic and anti-Semitic hate crimes has been associated with events such as the killing of Fusilier Lee Rigby in London in 2013, and fighting between Hamas and Israel in 2014.

The UK Government’s 2014 report on delivering the ‘Challenge it, Report it, Stop it’ hate crime action plan identified anti-Muslim hatred as an emerging challenge, and the Government’s Tell MAMA third party reporting service to record incidents and support victims of anti-Muslim hatred has identified that attacks that are reported to them take place both online and ‘offline’ (occurring in person rather than via the internet).‘Offline’ anti-Muslim incidents are generally reported by women and those wearing distinctively Muslim dress. There was also a significant level of under-reporting to the police of ‘offline’ attacks.

The Commission’s 2011 inquiry into disability-related harassment, ‘Hidden in Plain Sight’, and our subsequent ‘Manifesto for Change’, identified a fear among disabled people who experience harassment that police or other authorities would not believe them if they reported it, putting disability hate crime at significant risk of under-reporting.

Part of protecting against and responding to hate crime is protection under the law. Recent legislative changes under the Legal Aid, Sentencing and Punishment of Offenders Act 2012 have extended to transgender identity existing legislation allowing for sentences to be made more severe when motivated by hostility towards the victim on the grounds of race, religion, sexual orientation or disability. This means that all five monitored types of hate crime are now covered under the legislation.

In this blog, we have presented some of the findings that the report has drawn together relating to hate crime, but ‘Is Britain Fairer?’ also considers 42 other indicators relating to twenty-first century life in Great Britain.

The evidence indicates that there are areas in which Britain has become fairer and areas where real challenges remain. Improvements need to be made across the board to aim for a Britain that is truly fairer. The ‘Is Britain Fairer?’ report is intended to influence action to address these challenges across all sectors. It will help shape the Commission’s work towards a fairer society and we hope it will inspire other organisations to effect change as well.