By Phoebe Shen, Student, University of Sussex, School of Law. 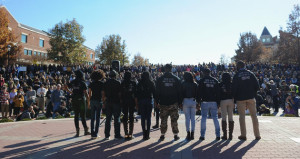 Members of the Concerned Student 1950 movement speak to the crowd of students on the campus of University of Missouri – Columbia on November 9, 2015 in Columbia, Missouri. (Photo by Michael B. Thomas/Getty Images)

During the week of November 9th, this message cropped up on the Facebook profiles of many of my peers in the United States in support of student protests that occurred across multiple American university campuses including the University of Missouri, Yale, and the Claremont Colleges in the past weeks. At the core of this movement is the struggle against institutional racism led by Black students and other students of color as they organized around experiences of racial microaggressions and outright hostility that they faced as minorities. Along with the status quo, campus protesters are also challenging an often unquestioned and unconditionally accepted civil right, the freedom of speech. While free speech can function as a mechanism for disenfranchised groups to have a voice, when unrestrained it silences the vulnerable and privileges the dominant.

This debate has since extended to a discussion of political correctness and free speech on university campuses. Before Halloween, Yale University’s Intercultural Affairs Committee sent an email to the student body asking students to refrain from wearing costumes that were “culturally unaware and insensitive,” specifically to avoid elements like turbans, feathered headdresses, and blackface. In response to this, Erika Christakis, a faculty member and student residence administrator, wrote an email to those living in her hall expressing her frustration with the official guidelines and her belief that students should be able to wear whatever costumes they want even if they end up offending people. This email sparked outrage among the Yale community as hundreds signed an open letter criticizing her argument that “free speech and the ability to tolerate offense” should take priority over other considerations, namely the protection of the mental and emotional health of minority students. The university has long been framed as a space where students should feel challenged and uncomfortable as they learn how to tolerate offense and navigate the complexities of life, and those who call for “safe spaces” for minority students are portrayed as doing their community a disservice by protecting them from anything that could cause them offense. However, overt incidents of racism where racial slurs are shouted at black students and fraternities sing odes to lynching are not abstractions or isolated incidents. These incidents are where arguments about freedom of speech become most tone deaf as they cause real emotional harm to those affected, and as Jelani Cobb puts it in “Race and the Free-Speech Diversion,” that “the freedom to offend the powerful is not equivalent to the freedom to bully the relatively disempowered.”

As important as the freedom of speech is to facilitating productive political dialogue in a liberal democracy, an uncritical defense of the freedom of speech can have a multitude of emotional harms that are often unrecognized. Nearly every liberal democracy outside of the United States has laws or codes that regulate hate speech, including the United Kingdom. Garrett Epps writes in “Free Speech Isn’t Free” that b­ecause the European views on human rights were largely shaped after World War II, one lesson that they had taken was that “democratic institutions can be destroyed from within by forces like the Nazis who use mass communication to dehumanize whole races and religions, preparing the population to accept exclusion and even extermination.” The dogmatic, quintessentially American fixation with preserving the First Amendment right to the freedom of speech overlooks the history fraught with the systematic silencing of the historically marginalized and further deflects important conversations about contentious issues that are driving party lines and social boundaries deeper. What is being discredited and ignored when racist rhetoric is blindly defended in deference to the unrestrained freedom of speech is the struggle of minorities in advocating for their own dignity and humanity.

In Justice Oliver Wendell Holmes Jr.’s dissent in Abrams v. United States, Holmes refers to “the free trade of ideas” within the “competition of the market,” a concept now commonly phrased as the “marketplace of ideas,” a forum where the truth will emerge in a free and transparent society as long as all ideas, no matter how morally reprehensible they may possibly be, are carefully deliberated and all perspectives considered amongst the polity. However, this concept is faulty when operationalized as the status quo continues to favor affluent, white, cisgendered men, and power dynamics inevitably shift in favor of those groups. The “marketplace of ideas” naively assumes equal access to being heard. In reality, while all voices in society do have access to some outlet such as the Internet and social media, there are still those with privileged access to the mainstream media whose voices continue to overpower the minority’s voice and disproportionately dominate the conversation.

The freedom of speech, while intended to be a tool for marginalized groups, still benefits the most powerful as it is used to derail important conversations about race and other contentious issues which allows the agenda of the majority to remain prioritized over the needs of the marginalized. Hate speech regulation can be instrumental in holding dominant groups accountable for the past and can act as a symbolic reminder of the oppression that marginalized groups face on a daily basis. The trauma of groups that have been historically oppressed must be acknowledged, and a message must be sent to society that society is moving forward and the persecution of the marginalized will not be condoned. While equal justice under law is a noble goal, only when society has sufficiently made reparations for the historical wrongs that marginalized communities have faced will hate speech regulation be unnecessary. Until the right of free speech can be thoughtfully balanced with the rights of minorities to feel secure in their identity on university campuses and everywhere else, the regulation of hate speech will be vital in counteracting the oppressions of a society that has systematically devalued the rights of those who are different, time and time again.