By David Wilkin: Postgraduate Researcher at the University of Leicester 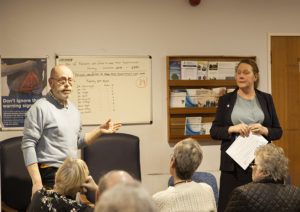 You do need to be disabled to be a victim of a disability hate crime – don’t you?

Working as a volunteer Job Advisor can provide high levels of job satisfaction alongside stress, disappointment, and utter frustration. This role involves meeting with and trying to help a range of people, most of whom just want to have a good job and to gain some financial autonomy. In the past I have suffered a long-term psychological condition and can therefore relate to some of my clients who are also suffering from both physical and/or psychological impairments. No matter how much legislation exists to remove disablist prejudice from recruitment processes discrimination remains, to the detriment of many of my clients.

As I have felt my own pain in the past, I feel their pain now: I worked with one young lady to get her a position in a retail outlet. We were progressing really well until they discovered that she had applied previously and without success. We had applied online and secured an interview and the joy from my client was palpable. When the recruiting manager called me I assumed that it was to confirm an interview time; until the manager said “isn’t that the girl with Down’s syndrome?” I answered affirming, not wanting to deceive. “Ah, the job has gone” – said the manager – although the same vacancy continued to be advertised the following week. I have observed similar examples of disablism before, and disablism seems to permeate the practices of many perspective employers. The same client stated “it’s always the same, it’s because of who I am”. When she left the building I immediately felt her frustration. She had so much to offer the employer but they had rejected her application without the courtesy of ascertaining her capabilities. This was, by no means, the only example of this prejudice which I had witnessed and I became quite depressed at these experiences. My client was the primary victim of prejudice because of who she is – and I was a secondary victim. In my interpretation the client was signifying that this was a hate incident. In the UK this is defined as: ‘Any incident, which may or may not constitute a criminal offence, which is perceived by the victim or any other person, as being motivated by prejudice or hate’ (Association of Chief Police Officers (ACPO), 2017) additionally the incident would amount to discrimination under the Equality Act, 2010 (Legislation.co.uk, 2010). I have observed similar occurrences including where one client with short-term memory loss was rejected, and told “you will probably foet where you worked”- a comment which could only serve to destroy confidence for future applications.

How those who work with disabled people can be victims of disability hate crime (DHC) by proxy was brought to light by the Living in Fear report (Beadle-Brown et al 2014). This research was methodologically rigorous in that it utilised the mixed methods of interviews, focus groups, expert panels, and surveys to produce their outcomes. This research gathered data from people with autism, their relatives, carers and police. The report, and an associated article (Richardson et al 2016), illustrate how DHC perpetrated on disabled people had a secondary negative effect on their carers. Apart from being physically and mentally exhausted, carers voiced that they often felt anxious for their clients and commonly suffered from stress and ill health because of this (Richardson et al, 2016). Carers often felt that they had to give their clients emotional support following hate incidents without being properly trained to do so. Moreover, they continually had to use heightened vigilance in social environs to protect their clients from abuse – again without appropriate training or support. Furthermore, many of the carers felt that society in general ‘accepted’ these incidents of DHC and that society did not have the ‘cohesion’ to counteract these occurrences (Richardson et al, 2016:83).

Carers, whether paid or not, commonly felt that they did not receive adequate guidance or support for the valuable service which they provide and often did not know where to go for supportive advice (Beadle-Brown et al, 2016). Despite this lack of support, some carers have described a range of dramatic personal challenges. Included among these were ‘constantly fighting for ourselves or the person we care for’ (p63). Aside from affecting the physical and mental well-being of the carer, many advocated that they have become defensive, untrusting, and gave examples of wanting to isolate themselves from a society which didn’t seem to offer them any help. In extreme cases, threats from community members place a huge strain on carers. The report refers to one carer who was told: “we’re going to blow your sons head off and you’ll be made to watch” and, “people like him should be shut away” (p64). Some carers were living in fear of telephone threats or unsavoury items coming through the letter box. This research was important in revealing the plight of carers who undoubtedly offer a valuable service to any community. Whilst the societal imbalances, hostility and some necessary strategies of resilience are well documented as being experienced by disabled people (for example, Hollomotz, 2013) research concerning carers is less prevalent. Examples of multiple levels of prejudice were identified by the Papworth Trust within their ongoing work with disabled people (Papworth Trust, 2016). Evidence from Beadle-Brown et al (2016) corroborate with the work of the Papworth Trust in revealing the long-lasting emotional upset which victims suffer as a consequence. Upsets which can leave carers, friends and family members enduring repeated emotional turmoil over protracted periods.

Disability hate crime is one of the five monitored strands of hate crime in the UK (ACPO, 2017). Legislation protecting disabled persons also protects those who care for disabled people – although this may be less widely understood. The College of Policing not only stipulates in its Hate Crime Operational Guidance (2014) that carers are acceptable sources of DHC third-party reports to the police – but denotes that they can additionally be victims of hate crimes:

“A victim of a hate crime or incident does not have to be a member of a minority group or someone who is generally considered to be vulnerable. For example, a heterosexual man who is verbally abused leaving a gay bar may well perceive that the abuse is motivated by hostility based on sexual orientation, although he himself is not gay. Anyone can be the victim of a hate incident or crime, including people working inside the police service.”

Therefore, whilst our concern for DHC should rightly be focused on the primary victims of hostility and violence, this blog argues that academics and the wider society should not turn their gaze too far from those who provide valuable support and assistance toward disabled people. Paid or unpaid, recognised or not, carers and volunteers offer assistance often without appropriate training or support. These people likewise should not be victims of DHC.

Papworth Trust (2016), Disability in the United kingdom: Facts and Figures, Cambridge: The Papworth Trust. Online at:

One comment on “Your Problem is My Problem: Disability Hate Crime by Proxy -the Effect on Carers and Voluntary Support Workers”